Portugal: A Tale of a Bike, a Van and a good pair of Shoes part 1

Lisbon ( Lisboa ) where we flew into, where are trip begins. Where we would spend the next 3
days getting acclimated, wearing out the jet lag and building the bike. Picked up by Rita at the
airport the owner of the VRBO we were to stay at The Courtyard of Grace. Rita’s place was a 2nd
story flat located just under the highest hill in Lisboa, Miradouro de Monte, a short walk to a very
romantic spot overlooking the historic city with a view of the Castle and the Tedo River with its boats
and bridges. An excellent spot to sip wine, watch the sunset while listening to the romantic
Bossa Nova being played by one of many buskers allowed to play that amazing spot. 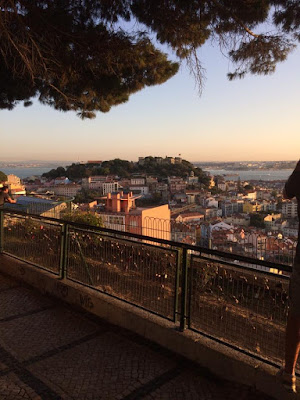 Our Lisbon flat located in the Graca District that sits on top of the highest of 7 hills that make up
historic Lisboa was a perfect spot for us to get acquainted with Portugal. Complete with old churches,
a Castle, and most importantly, small locally owned and operated ma and pa shops from bakeries
( Pastelarias and Padarias) to Restaurants and Mercados selling everything from veggies and
cleaning supplies to meat cheese and wine all within a very tight space and in this neighborhood,
despite what we had read, very little spoken english.

Oops, I got lost. Anyway, our flat... it had a nice little courtyard in the back, a nice private quiet
place to slowly build the tandem bike over the next 3 days while exploring our little neighborhood
and watching the sunset from the Miradouro De Monte. Lisboa is a rusticly beautiful city but after the
sun sets that is when it really comes to life and she looks lovely at night. 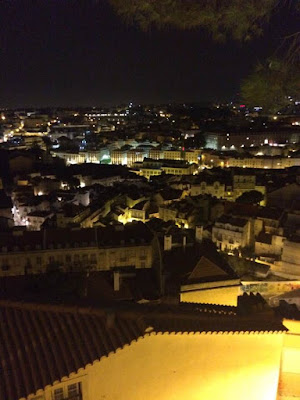 The Black Sheep tandem bicycle that we were to begin our trip with came in two suitcases
completely torn down and had to be rebuilt. With the tools that i brought for the job and a bottle of
wine i spent our second day building the bike. Fortunately all went well. Or so i thought.

Our First night out exploring the Graca District we got our first lesson of which we would not fully
ever remember…….Restaurants that serve Dinner (Jantar) are closed between 5:00 and 7-8:00 PM.
Exactly the time Terri and I expect to eat. Fortunately for us in a “Back Alley” we came across a very
small restaurant with its doors open so we proceeded to walk in. The owner Susanna was sitting
outside eating her meal along with her help whom i would assume was family, anyway, as we passed
by her she alerted us to the fact that her restaurant as well as everyone else's was closed being that
it was only 5:30 or so. We had not planned for this “siesta” and were famished so to speak. Susanna
took pity on us, invited us to sit down, got us a bottle of wine and proceeded to introduce us to what
we would soon learn as “traditional Portuguese cuisine”.

Our meal started with “petiscos” a generous serving of fresh bread, white cheese, and small
olives with the pit still intact. After some time, as Portuguese are never in a hurry, we ordered our
meal. Terris was a large Portuguese style sausage with a side of peeled boiled potatoes and boiled
Vegetables. Mine was the same except I ordered the Salmon wich was a large steak, bone in and
smothered in what we initially thought was butter but later realized was very rich and flavorful olive
oil unlike any we have ever had in the States.

We would like to take a moment to describe to you what we learned to be true throughout the
entire country of Portugal.
Breakfast as we know it does not exist. For us in Portugal, Breakfast would consist of a duplo
espresso con lait or 2 shots of espresso with milk in a medium sized cup. Suco laranja or Fresh
squeezed orange juice which was amazing and a pastry. Terri would normally have a croissant and
i would have a mista con fiambre e queijo or a pastry stuffed with ham and cheese. These meals
would be found in a Pastelaria or Padaria which are Bakery / Cafe’s found in every town or village
without exception. The only difference being how they prepared the pastries. Near Lisboa pastries
were light and flaky. Up north pastries were heavier and eggier.

These types of establishments always serve espresso, Suco Laranja natural, and booze or at
least Vino and cerveza  which could be purchased anywhere that served food and taken outside to
walk about and drink.

For Dinner; A restaurant featuring a full service sit down dinner does not open any earlier then
7:00 PM but most likely 8:00 PM. Upon being seated the table will be presented with small olives
with the pit, white cheese, and homemade bread. You can turn these down as they will be included
in the bill. We loved them, I mean who can say no to the best olives ever and always different
depending on region, Killer bread, and delicious cheese! Fish is always the featured part of the menu.
Meat is usually pork, chicken, or lamb (usually stewed).
Sides were almost always with few exceptions batata’s or potatoes and were served fried, chips
or boiled. They love their frito battata or french fries as we in the states like to call them.

After a few days of loving Lisboa the Blacksheep is built and ready to ride. First thing to do is give
her a test ride. A shake down, chase out the bugs and so we do. Now Terri and I have ridden tandem
for probably close to 20 years, we've ridden the infamous Monarch Crest Trail, and other backcountry
rides, multiple tours, as well as our weekly fitness rides and in those 20 years we have laid the bike
down possibly 2 or  3 times. Tandems are very stable and hard to put down and so, on our test ride,
our first ride Portugal, we get on the bike, take our first pedal and suddenly a strange feeling
overcomes me. While the handle bars are going straight the bike is not. It feels as though the bike
is going in two directions, but in truth the bike was simply going down and to our surprise we are on
the pavement. Cussing, arguing and visibly frustrated. It didn't take long realize that I had failed to
tighten down the handlebar to the fork. A hard lesson but that's what shakedowns are for. 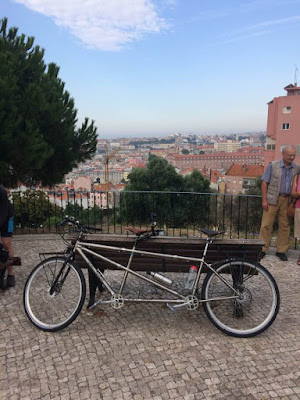 As we’ve mentioned before Lisboa sits on several rather steep hills and the Graca, where we were
staying, sits on top of the highest hill, and for us on our test ride there is only one way out and that is
down, down, down steep narrow cobbled roads. It was all I could do to hold the bike back and it
certainly tested out our 8” disk brakes. Problem is---what comes down must go up. Ouch! And as it
turns out these roads were simply too damn steep to ride up. At least for us that is. The other
problem which would haunt us for the entire trip is that it is incredibly hard to navigate in these old
cities. There is no grid and roads twist and wind to who knows where. All these factors led to us
having to push our bike back up to our flat. On top of that i am suffering from turf toe and pushing
the bike has inflamed it to the point that i am in severe pain. No problem. We leave for our
“Tour of Portugal” tomorrow. One thing's for sure, the bike has been officially tested and is in good
working order.
Posted by t and g Vroom at 7:44 AM